For Those Who Take Care of Our Wildlife and Wild Places

I’m sure we have countless examples of how social media can make the world seem like a smaller place. Earlier this month social media did just that while echoing again the tireless efforts and perseverance of the PALMS’s 2019 awardees.
At our Annual Conference this year, the PALMS board recognized the Friends of Tamarack Lake by presenting them with the 2019 Lake Award for an Outstanding Organization. I think it is safe to say that everyone who heard the story, about what the group had gone through for the lake this past decade, felt inspired by their dedication and perseverance. So many people helped get the lake where it is today and they all were very deserving of the well-earned recognition. Amongst the people to accept the award for Friends of Tamarack Lake was Sue DeArment. Her and her group traveled hours to State College that day to receive the award before turning right back home the same day.
The next day, PALMS’s executive director, Kate, noticed a post on facebook, under a group she follows for hiking in PA. The post was about a hiker seeing a bald eagle fall down from the trees onto a trail. As she continued to read the post with updates on the eagle’s rescue, she recognized a name, a name she only became familiar with a couple days ago. According to the post Sue DeArment, a Capture and Transport permittee and founder of Wildlife In Need (WIN) Emergency Response of Pennsylvania, was contacted to come help this eagle. Looking at the timing of the post you can imagine the surprise when Kate noticed this was later the same day that Sue was in State College receiving the award.
Many of you might agree, that it is often the case, there is no rest for those who fight to save wildlife and our wild places. Turns out Sue was just 10 minutes from home after getting the award, when she received the call about the eagle. She ended up going home, picking up some more equipment and changing clothes, then driving back another 1 ½ hours to Heathville. She hiked 2 miles, with two other people, and met another two people at the site to search for the Bald Eagle. It was fortunate that they found her in the dark. If it hadn’t been for her head lamp, they may have never seen her. The caller, Brandon Kocent, and Sue hiked back out the 2 miles while carrying the adult eagle. She then got back in a car to begin driving to the Rehabilitation Center 2 hours away.
Upon evaluation at the wildlife center, it was determined that the eagle was suffering from lead poisoning. Lead poisoning is something that is becoming prevalent in our birds of prey and other scavengers that feed on remains of hunted game and gut piles. These gut piles can contain lead fragments from hunting with lead bullets that the birds ingest. Waterfowl are also susceptible to ingesting spent ammo and lead fishing sinkers that are often lost in our lakes and rivers. Unfortunately for this eagle, it would seem that as the lead poisoning progressed, it caused the eagle to fall from the tree onto a trail suffering a concussion as well. The eagle is currently at Tamarack Wildlife Center recovering from the lead poisoning but still has to regain vision from the head trauma to be able to be released back into the wild.
We share this story as a chance to give thanks to those in our community working tirelessly to save our wildlife and wild places. And hopefully we can offer them some help by making some changes in our own habits. Whether you are using lead hunting ammunition or lead fishing tackle, you can go lead free. To learn more, we included a downloadable fact sheet on lead poisoning in wild birds.

Photos below, L-R (The eagle recovering at the Center and Sue DeArment rescuing the fallen eagle) 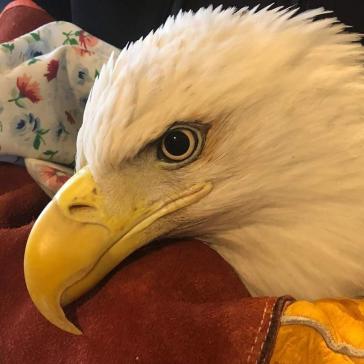